Hell Hath No Fury: Women and Anger in Relationships 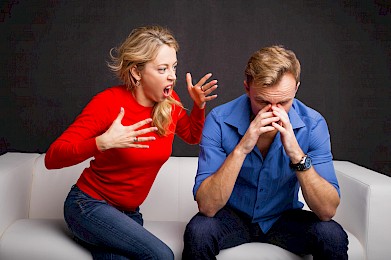 Today’s woman is in a bind when it comes to love.

Research shows that if you are a female in a heterosexual partnership, you are far more likely to initiate discussion around conflict and pick up on nonverbal cues of distress than your male counterpart. In short, you are the emotional barometer of your relationship, the canary in the coal mine.

And nature has hard-wired you this way. As a woman, you come to the table with an entirely different skill set than your mate, including the ability to shift more quickly from an argumentative stance into a conciliatory one.

Women and Anger: A Different Response

What we see in the research is that in conflict, men’s heart rates rise faster and stay elevated for longer periods of time than women’s and that this vulnerability for many men results in a tendency to withdraw and deny; for others, to lash out.

Given this reality, women are often the first to utter a peep when things begin to go awry in their relationship. And utter we do. We talk (to both our partners and others). We cry. We shout. We scream. We pound so hard on this seemingly insurmountable wall that our fists bleed, sinking to the floor in a heap of tears.

If you’ve gotten to the point where you’ve ceased turning towards your partner chances are you’re sitting there right now. It’s a double-bind. “If I go to him,” you say “I get shut down, shut out, or rejected. If I go away and leave him alone, he’ll never find me.”

Perhaps it is for these reasons that 69% of all divorce is initiated by women. After all, we live in a time when women are more empowered economically, politically, and socially than ever before. Leaving is an option, and, we ask ourselves, why should we stay?

The kicker is that increasingly, there is ample evidence to support that the longevity of your marriage may very well hinge on your ability to bring anger to your partner, and in turn, his ability to respond to it.

We know from research that 81% of couples will self-destruct if the man is not willing to share power with his wife. The growing evidence to support this is staggering. One study, conducted by Dr. John Gottman, renowned for his work on marital stability and divorce prediction, showed that anger expressed by women during conflict was associated with greater marital unhappiness at the time, but with greater marital happiness of the couple years in the future.

Based on these studies, Gottman asserts that being agreeable for women may not be a good thing for the long-term happiness of a relationship. “Agreeability for women is all about compliance, whereas agreeability for men is associated with being nice and sharing power,” says Gottman.

But wait, the plot thickens. Gottman’s research also speaks to the role of the initiator (that would be you gals).

Here we see that if a wife approaches her husband in a destructive manner, and uses what Gottman refers to as a “harsh start-up,” the conversation will end negatively, 96% of the time to be exact. Furthermore, evidence suggests that if the husband does not respond to his wife’s complaints and engage in de-escalating behaviors, the couple is likely to divorce.

Is it merely a question of being nice? Is our newest role in relationships to master the delicate but powerful art of feminine rage? It seems a lot to ask. I’d even venture that it’s laden with the ever-oppressive myth that once again we have to do it all, and do it with a smile.

And if I am not careful, you might even believe that maybe, if only given the secret you can blow that wall down of your volition. Waving it gently away with the grace of Glinda, the Good Witch, kicking it in with the force of Lara Croft. Ladies, I’m here to tell you that that’s not possible.

In fact, the solution to this stalemate is going to feel very counter-intuitive, but I assure you, it is the only option.

First, I’m going to suggest that you do nothing.

I’m proposing a moratorium on taking action until otherwise notified. Instead, let yourself experience all of those painful emotions you’ve been directing outwards. Let your feelings sink in, all of them. Sadness. Hopelessness. Loneliness. Desperation. Powerlessness. No more pounding and screaming at that wall. No more sliding handwritten instructions on a napkin under his door. It doesn’t work.

Second, no pulling away.

I know this may be hard. But shutting him out is not an option. Just like you, he’s stuck in a dance of fear, anger and hopelessness. Trust me it’s there. I see this again and again in the couples I treat, women interpreting their partner’s silence as a lack of love and concern versus what it is, a paralysis of self, an inability to access and reflect deep compassion (and in turn empathy).

Bringing us to the final and most critical point — have compassion.

Accessing compassion may be the hardest task, but it’s essential, because what you will uncover if you strip down to your raw and most naked self is that most of us, in these vulnerable and broken places, are just doing the best we can. It’s worth noting that very few of people enter into love and relationship with the intention to hurt or cause harm, yet somehow, inevitably, we all do. Love is hard. Loving well even more challenging (and don’t worry, acknowledging this is not the same as enabling it).

The pain that emanates from relational distress often speaks of much deeper wounds that you both have been incurred over many years in relationships. These wounds are social, and given this, the balm that is most likely to facilitate healing is also social. It’s called empathy. But empathy is not easy to come by when your relationship is in crisis. Desperation can hijack the most enlightened soul, reducing us to our more primal selves, focused solely on survival and viewing our mate as Tyrannosaurus Rex.

Finally, since your anger will not miraculously vaporize just because you have taken a moment to pause and apply some compassion let’s revisit what to do with it. Call a Couples Therapist. Because while the suggestions in this article may stop the hemorrhaging, to clean out these wounds and heal will require the help of a trained professional and a damned skilled one at that.

A relationship in gridlock is steeped in years of negative sentiment; you both became lost in your landscape, and can’t see the forest for the trees. For this reason finding a Couples Therapist trained in state-dependent and evidence-based couples therapy is key, as we specialize in helping couples navigate their way out of such entanglements.  Now, given you have made it to the end of this article I’ll lift the moratorium and encourage you to take action. Act now and schedule your free initial consultation. We offer emotionally focused therapy, couples retreats and traditional couples counseling.

This article was orginally published on Your Tango.